After all of the work (and many hours of ingredient hunting) over the weekend for Sunday’s dinner, I thought I’d keep things a bit more simple on Monday night. I’d been meaning to try out some of the recipes from Ten-Minute Bento (Megumi Fuji, 2007), since they all looked delicious and relatively simple. I went through my cupboards to determine what I already had, prepped my shopping list, and then went out for the day. Easy peasy, right? Except that halfway through the day my eldest called from school to tell me she was feeling sick, and could I come and pick her up. So much for picking up the missing ingredients with the girls after school, then. Instead of the leisurely dinner prep I had been hoping for, I chucked the rice in the Instant Pot right before my husband came home, made a mad dash for the grocery store once he arrived, and returned home as quickly as possible. I know, I could have changed my dinner plans entirely, but at this point it would probably have taken longer to find another recipe, scrounge the house for ingredients, and likely defrost something from the freezer. 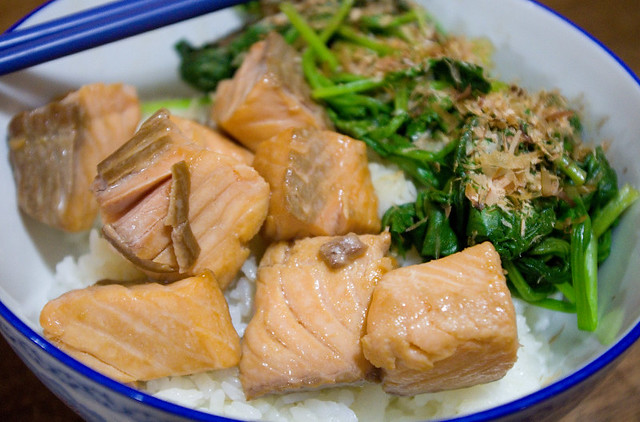 Luckily the recipes in this book are as simple as described, if not necessarily as quick. (It’s not a ten-minute bento if you have to cook the rice, marinade the fish for ten minutes, and then grill each side of the fish for 4 minutes per side. Just saying.) I upped the portions to make the bento on page 21 for four people, and we all greatly enjoyed our yuan-style salmon & spinach with bonito flakes. I would definitely make this recipe again. Honestly, if it hadn’t been for circumstances delaying me from getting the ingredients earlier, it would have been a snap! As a bonus, making the sticky rice in the Instant Pot was super easy and came out perfectly.

The Tuesday after Labour Day here in Canada means back to school for elementary school students in the public board. For my children, this comes with no little bit of anxiety, but as they get older I think it’s mostly balanced with a healthy dose of excitement. A big part of that excitement, I think, is getting to see their school friends on the regular again. Summer friends, i.e. neighbourhood friends and friends you meet at the park or wherever you’re traveling to, just don’t have the same staying power. 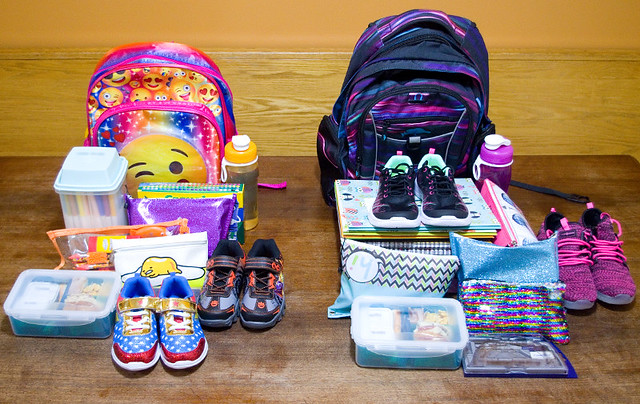 Of course, some of their excitement is purely material. While we don’t do a full back-to-school wardrobe in our house, each kid gets a first-day-of-school outfit (they’re usually identical, since they surprisingly still enjoy that). They also get new indoor and outdoor sneakers, as well as stacks of new school supplies in their favourite colours — mostly because they will have destroyed just about everything from the year prior by the end of June. 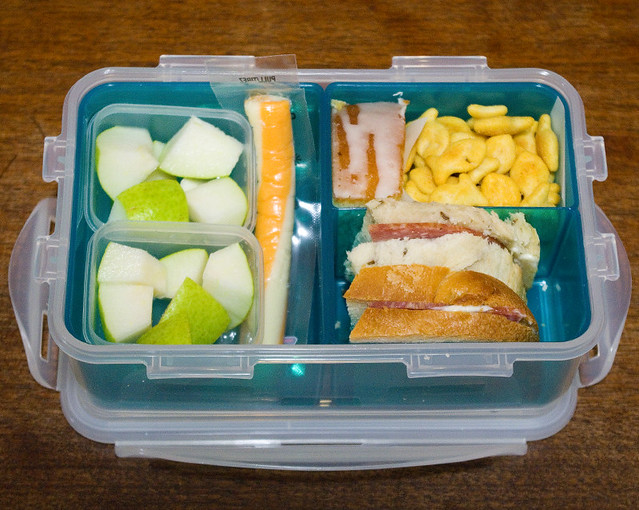 Although the kids are responsible for making their own lunches for the most part during the school year, for the first day I will generally do the honours. This year I’m trying to reduce the number of small containers sent to school because so few of them return (or return intact). Instead of lunch bags, this year I bought plastic, sort-of obento-style containers instead. Since everything fits in one box and the dividers don’t have to come out, I’m hoping that this means that less will be lost or left at school. 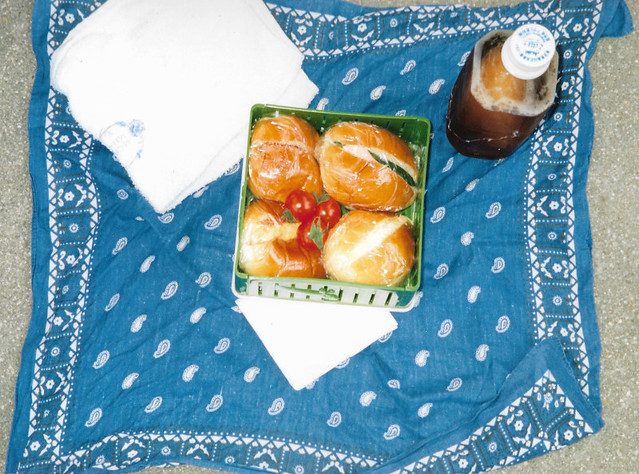 I was inspired by the lunches that I ate while in Japan on an exchange trip back in high school. I’ve seen some great videos on how school children in Japan help prepare and clean up from communal lunches, but that wasn’t a thing where I went (or possibly wasn’t for anyone in the time period I was there, I don’t know). Instead, we all “brown bagged” it, just like we do back here in Canada. The mother of the family usually woke up super early every day to make fresh obento boxes for her family. Mama-san, as she requested I call her, made some absolutely delicious food! I only too photos of two of the lunches; the one above is an assortment of little sandwiches, each one different, and a bottle of iced tea.

(And yes, I was taking pictures of my food even back in high school. Even when I had to pay to have the photos developed and printed. Some things just don’t change.) 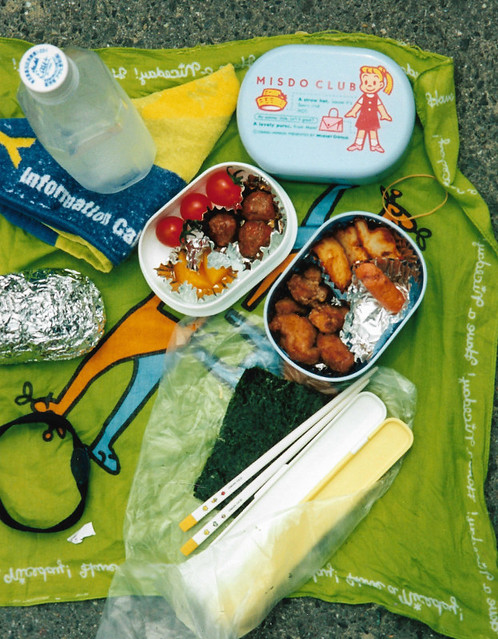 And this one was a more stereotypical Japanese obento, with little bits of all kinds of dishes (it was so long ago that I can’t remember exactly what each one was, I just remember it was tasty), and some nori and I think a rice ball on the side.

When the weather was nice — and we were there during a particularly gorgeous spring — we all sat outside, exchange students and hosts and other Japanese students curious about the foreigners. It was a lovely way to spend a lunch hour.

Having had a school lunch in two different countries, and now being responsible for making sure my own children eat healthily at school, I do wonder about this meal in countries I haven’t visited. What do you eat for lunch? (Although I’m told that in some places you call it “dinner”…)