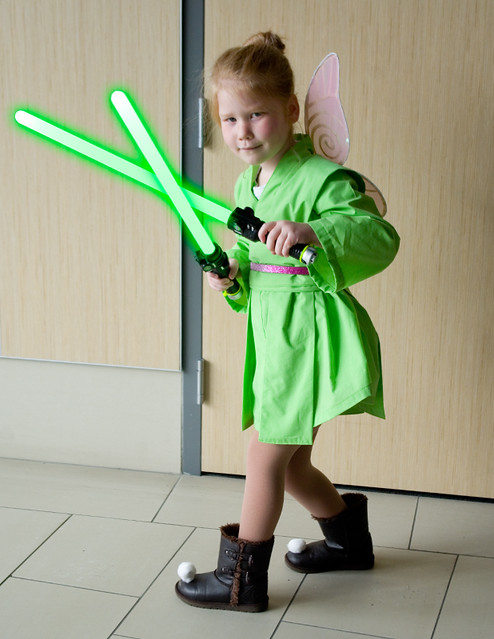 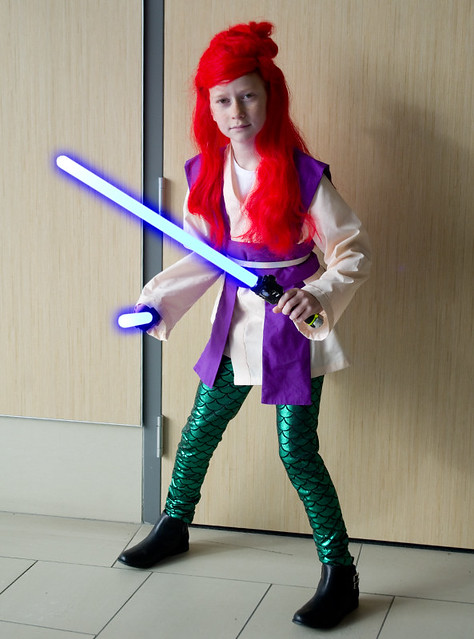 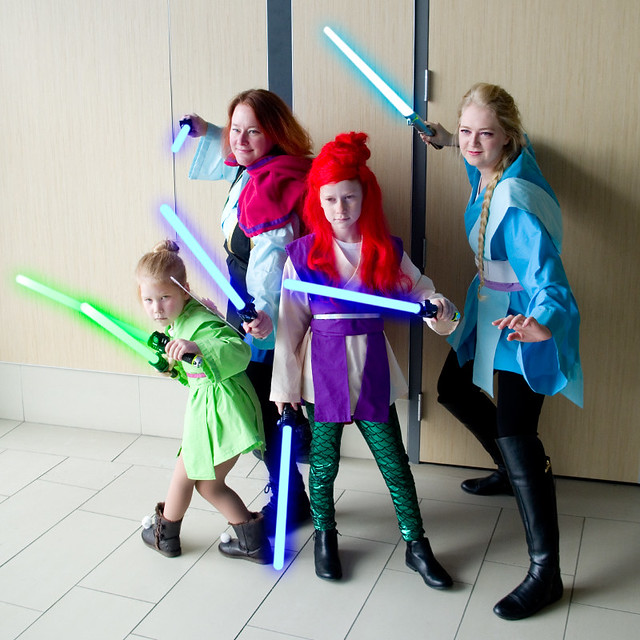 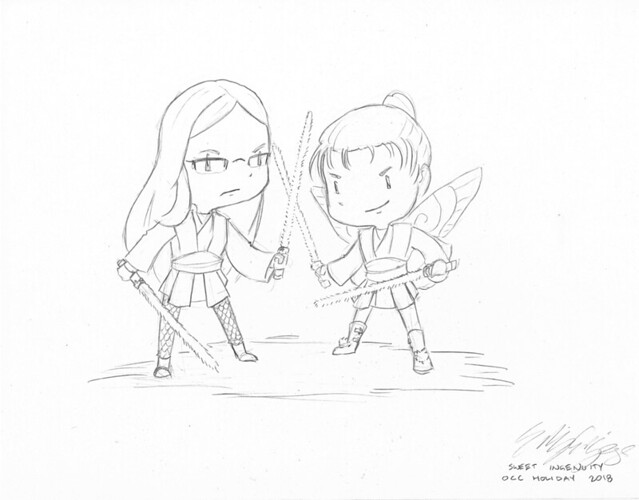 I was planning on going to Ottawa Comiccon: Holiday Edition this weekend, and of course since I’ll take any excuse to wear a costume, I’ll be dressing up. This year I’ll be bringing the kids along, and they have asked to dress up too! I was really hoping to get us all into coordinating costumes, but as of right now theirs kind of look like this: 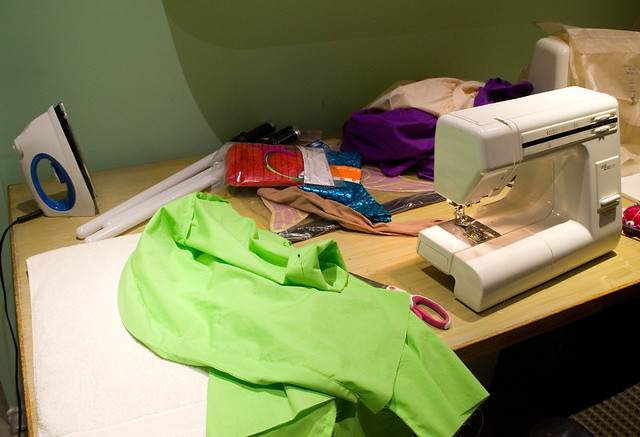 Really, I only have 1.25 robes left to make and some accessories, but it still feels like so much! I was pretty lucky that I was able to find most of the elements of the costumes around Halloween — some of the parts were even highly discounted on the after sales. The plan is to work with the Anna Jedi costume that I wore last year. I think I can, I think I can…

Still plugging away at those costumes… I think I’ll have the kids’ done in time, but I haven’t even started on my Friday costume. Eek! And yet, I remain super proud of myself because I successfully both sewed and appliquéd Thing 1’s spandex bodysuit. 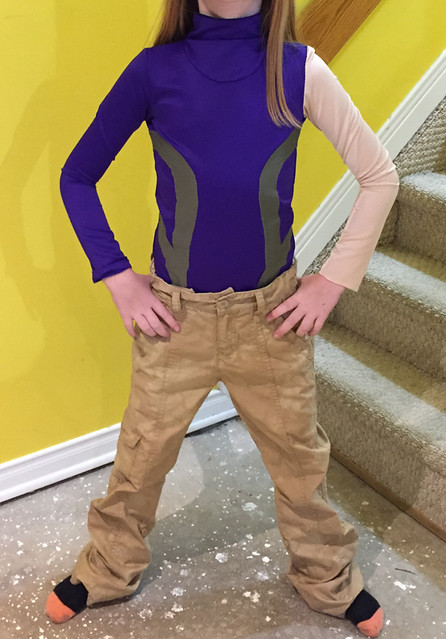 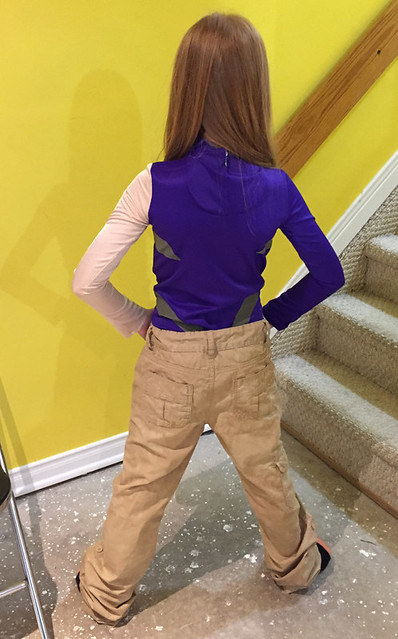 I mean, I know it’s not perfect, and there’s a lot of detail work yet to be done, but the bones are there. It was the bones I was most worried about, actually. 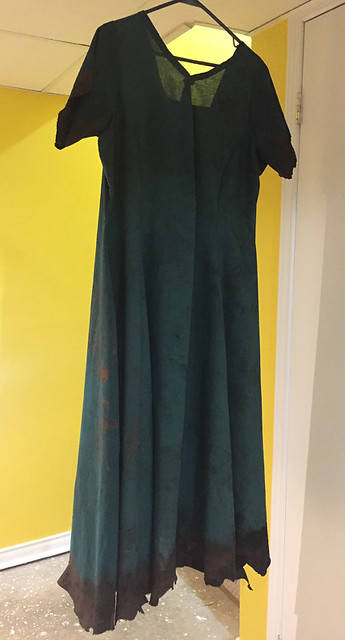 And I think I’ve finally found something to weather my Saturday costume that actually stays… I jumped all over this costume in the black soil of the garden twice, but the stains wouldn’t stick. Go figure. I mean, if you look at my actual gardening clothes, you’d think that staining my clothes with it would be a given. In the end, I’ve found what works best is plain old dollar store acrylic paint.

Costume prep is on hold for a bit today while I prep for the Blackburn Hamlet garage sale, because I have so much stuff to get rid of. This is what happens when you buy things in lots. Hopefully sewing/crafting will resume later tonight or tomorrow night. 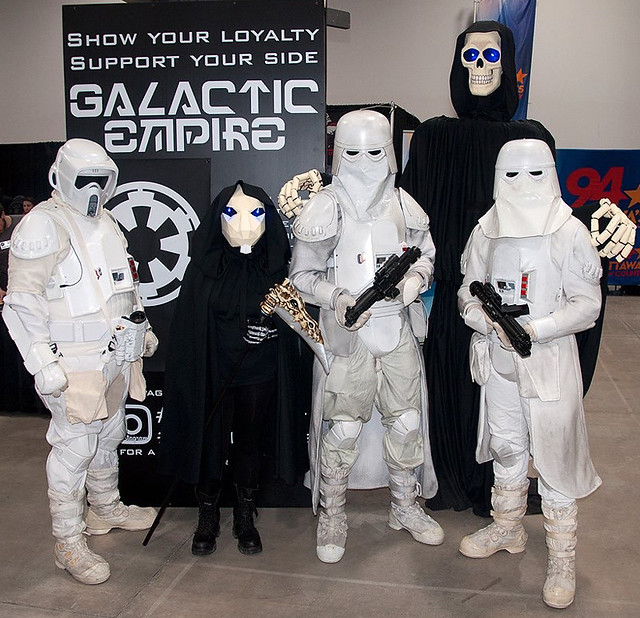 The paint is currently drying in my kitchen, which means cooking is being kept to a minimum for the moment. Instead, I’ve finally found the time to edit the rest of the photos from Ottawa Comiccon: Holiday Edition! All of the photos were taken by Ian Walton, I just played with them a bit.

We started by taking photos indoors by the big windows at the front of the convention center for the best lighting — and look who we found! 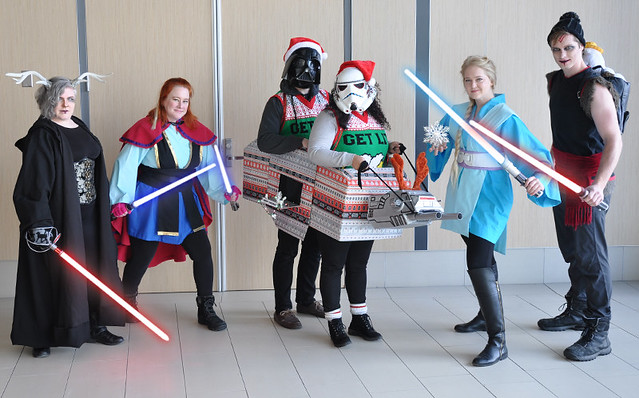 Christmas Darth Vader and the Stormtrooper in their holiday AT-AT were probably the most awesome (and seasonally-appropriate) costumes we saw all day. 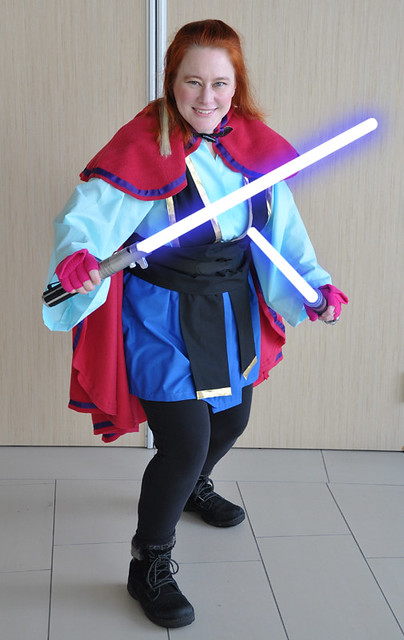 I discovered that I need to learn how to pose better in this costume. Also, I need to trim (or re-position) the white streak in my hair, which was a clip-in (the rest is my real hair dyed with Féria C74 Power Copper), so that it’s a matching length. 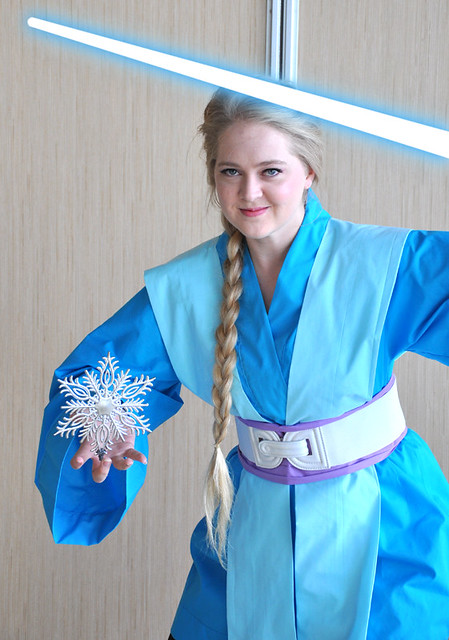 Elsa’s Force snowflake pops against the indoor backdrop, although it was hard to see outside. I was really happy with how Elsa’s costume turned out, because she made it herself and it was her first time sewing anything so complicated. She put so much hard work into it and she ended up with a great final product! 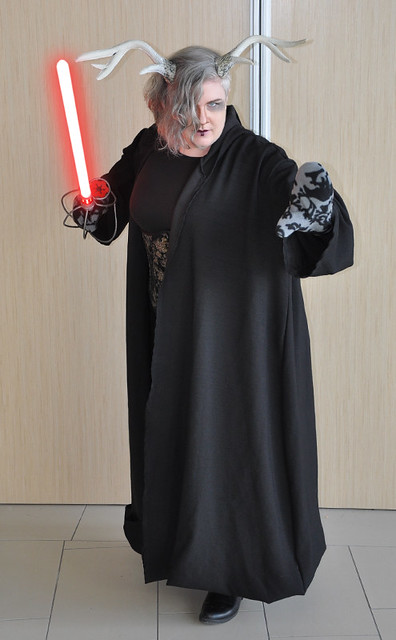 I absolutely love Sven’s antlers! And yes, the reindeer does have reindeer mittens. 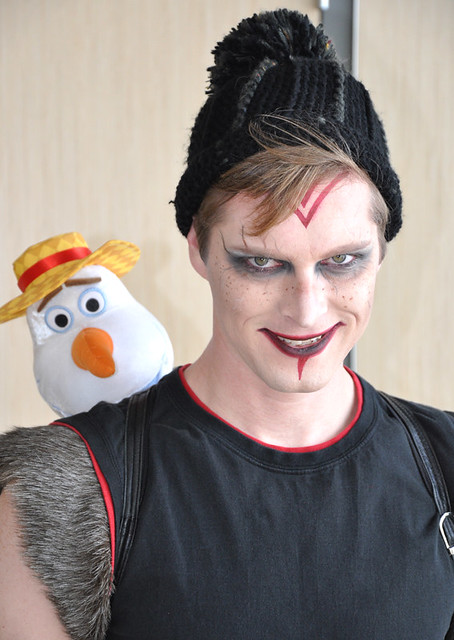 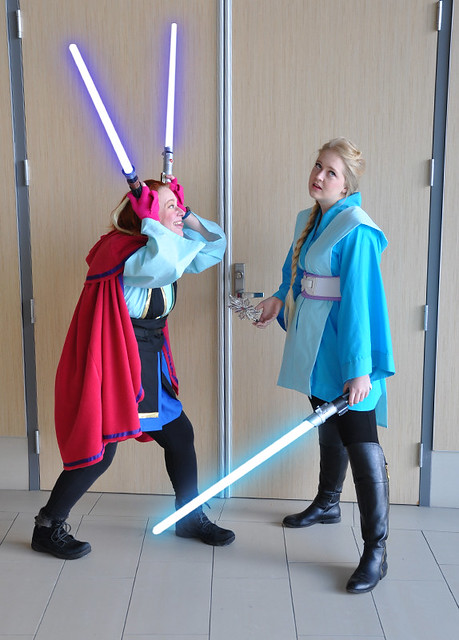 This is probably my favourite photo of the entire day.

Then we moved outside to freeze for our art: 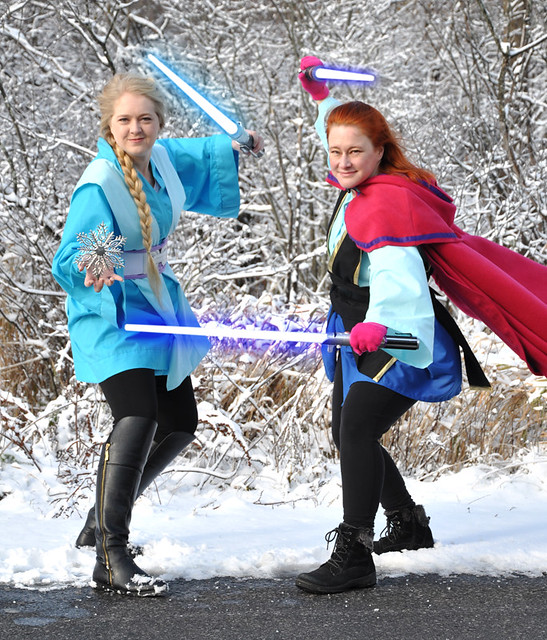 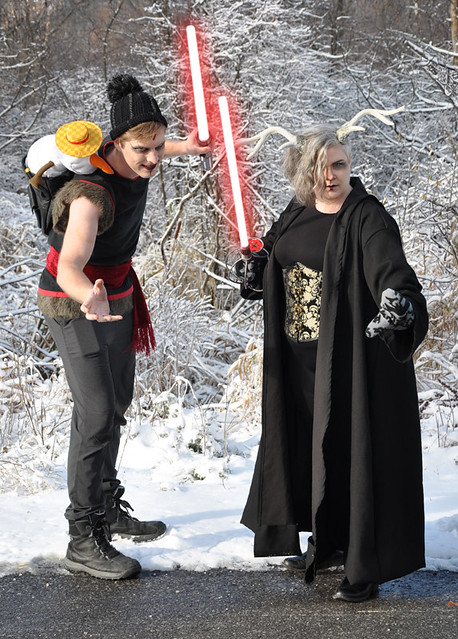 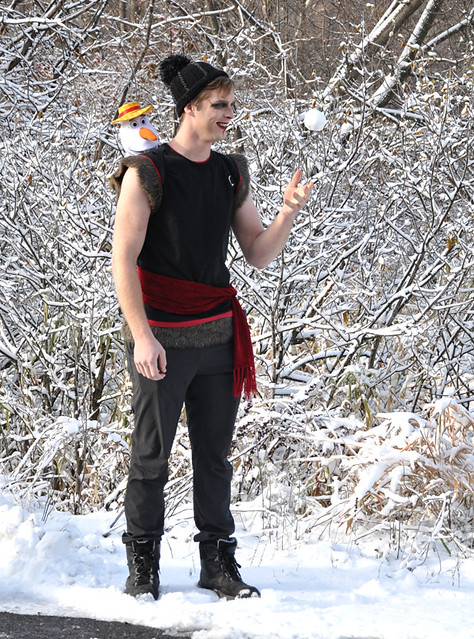 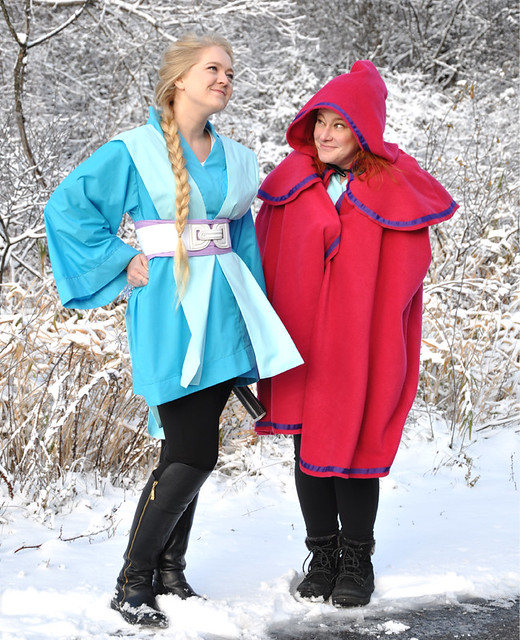 The cold may not bother Elsa, but it definitely bothers Anna. 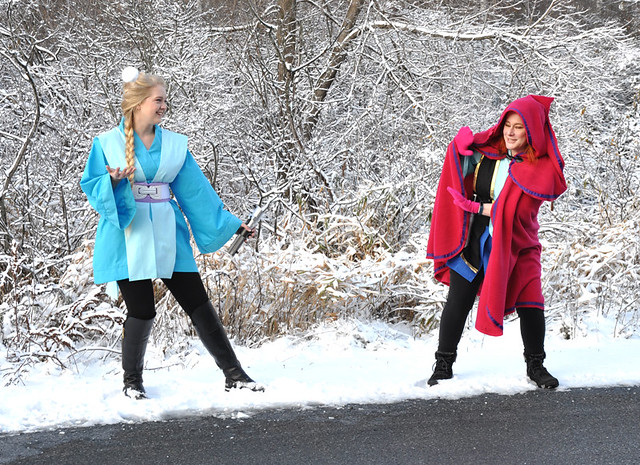 I hope to use this costume again for the regular ComicCon in May, and this mini-con was a great chance to try it out and figure out what needs to be changed, what can be done better. I definitely want to add some more detail to it with embroidery or maybe paint. I want to alter the obi so that it’s stiffer and has more structure. And I need a better lightsaber, preferably one that lights up on its own. I may have convinced my kids to join in on the group as well, so that’s more costumes to make — but that won’t start until much closer to the date, since there may be some growth spurts in the meantime and I don’t want to have to make the costumes twice.

Much to my surprise, we all managed to complete our costumes in time for Ottawa Comiccon: Holiday Edition over the weekend. My friends got some really great shots of our group, but they will have to wait until tomorrow because I spent way too long wrestling with the compatibility of unfamiliar camera RAW formats to finish going through them all. It was also my very first time trying to get edit photos of lightsabers so they look like they’re glowing.

The snowy weather provided a perfect backdrop to our group picture: 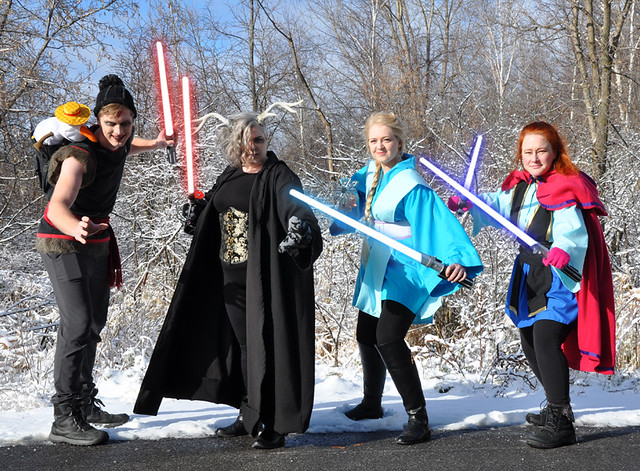 Left to right, that’s Darth Kristoff (with Olaf on his back), Darth Sven, Jedi Elsa, and me on the far right as Jedi Anna. Yes, we did do a Disney’s Frozen/Star Wars mashup.

I can definitely say that we had a lot of fun wearing these costumes, even for a con as small as the holiday one (which, let’s be honest, is more of a marketplace and less of a con). After all the work I put into this costume, I am determined to wear it on at least one other occasion, though!