My (rather late) package to my little brother arrived in the mail at his house today, so I can finally write about what I made him. My brother is a technophile, but sadly I can’t afford to buy him the latest and greatest gadgets on the market. Instead, I hope he will be happy with socks. 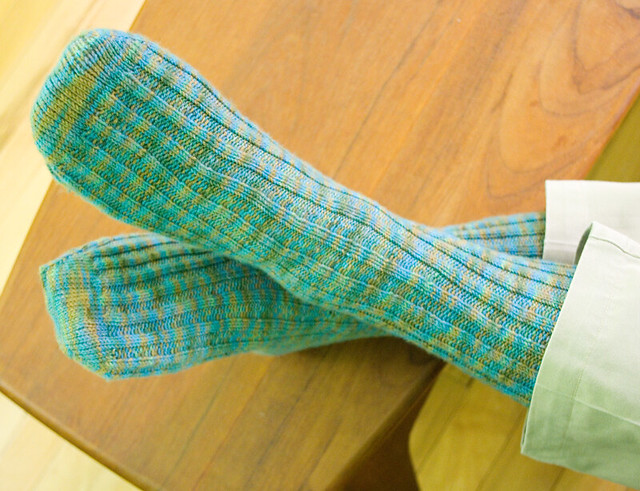 I knit these socks out of, um, well, I lost the ball band so I don’t remember the name of the yarn. They are a lovely hand-dyed merino sock yarn, though! They’re stretchy, comfy, and warm for this incoming winter. The pattern is a toe-up one that I devised years ago that is particularly great for using up absolutely all of a ball of yarn. First, you divide the yarn in half; then, with each ball, knit the foot, and then knit upwards from the ankle until you run out of yarn. I love it, and I keep meaning to write it down for others in a way that is actually readable. Right now, the pattern lives in my head and on the back of a slowly-deteriorating envelope. I know it’s best to get patterns and recipes out there where others can use them, so I’d better write it down soon! 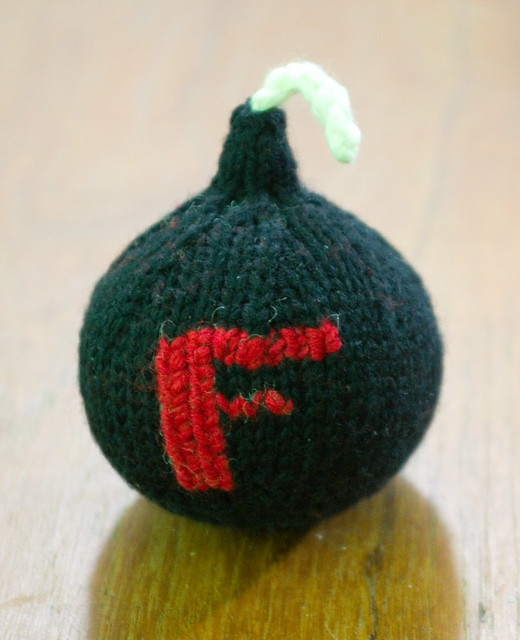 This hilarious F-bomb was most definitely not a pattern of my own devising, though. This pattern was recommended to me by a friend; it’s The F Bomb by Jenifer Spock-Rank, and it’s available for free on Ravelry. I knit it out of leftover scraps of black, red, and cream Dalegarn Baby Ull. I doubled up the yarn and used a 3.0mm needle so it wouldn’t be ridiculously tiny. Those little threads you can see in the picture are actually fibrefill stuffing — that stuff sheds almost as badly as faux fur! 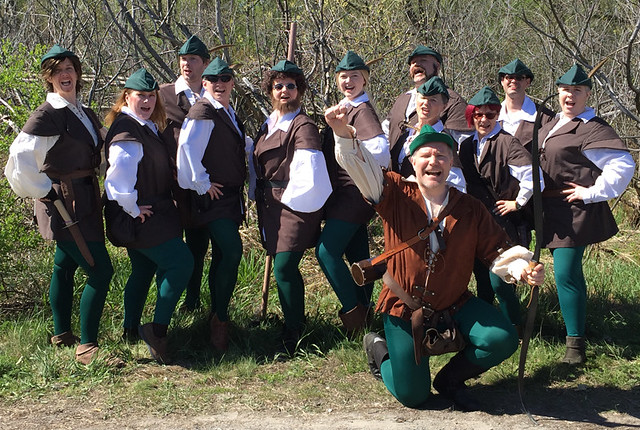 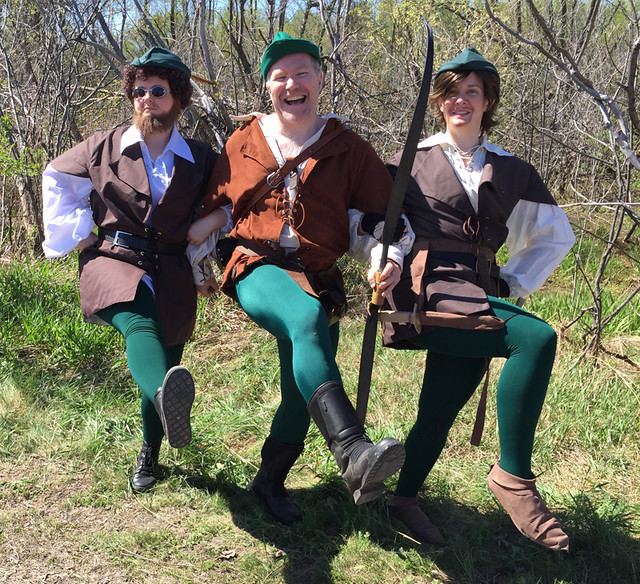 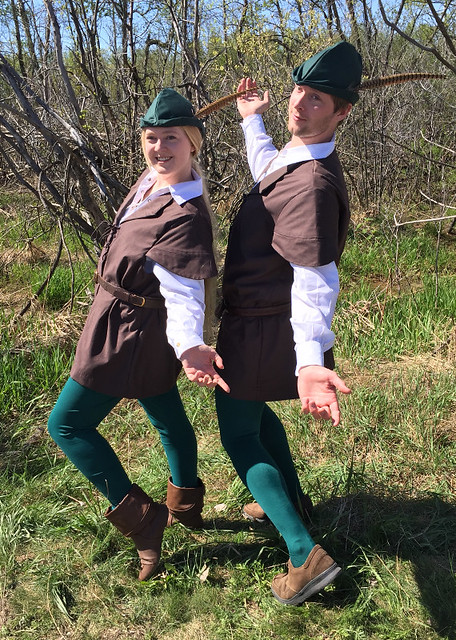 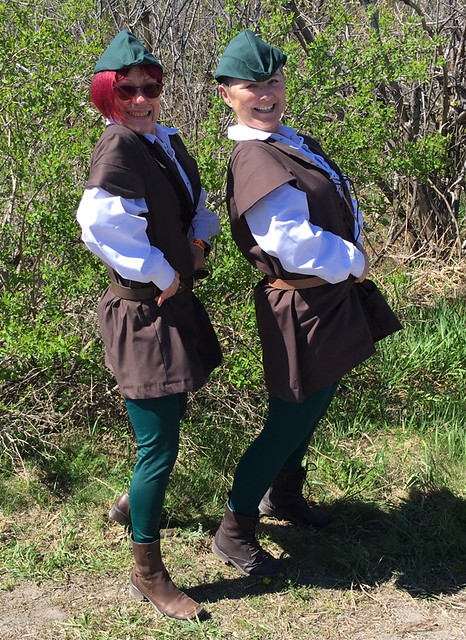 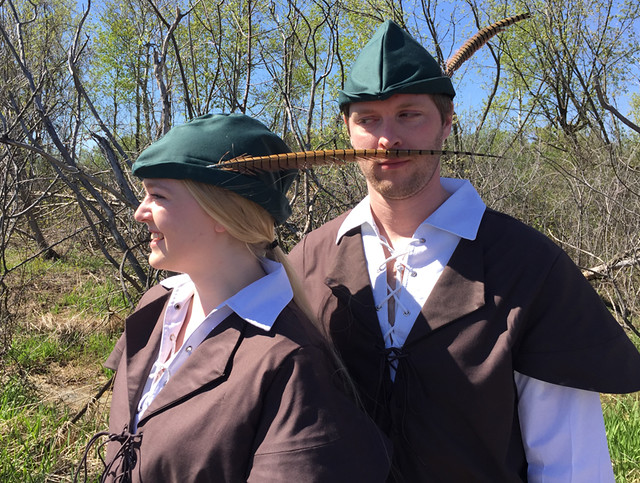 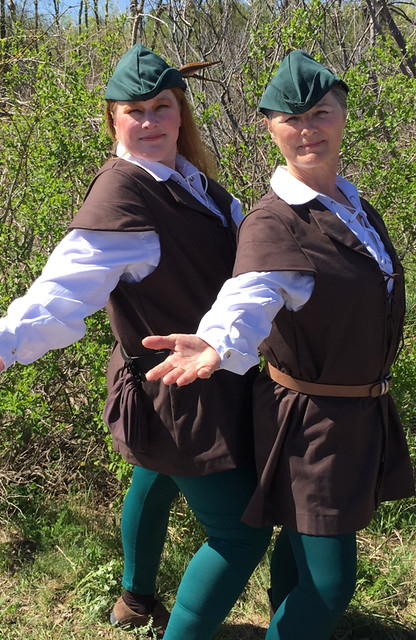 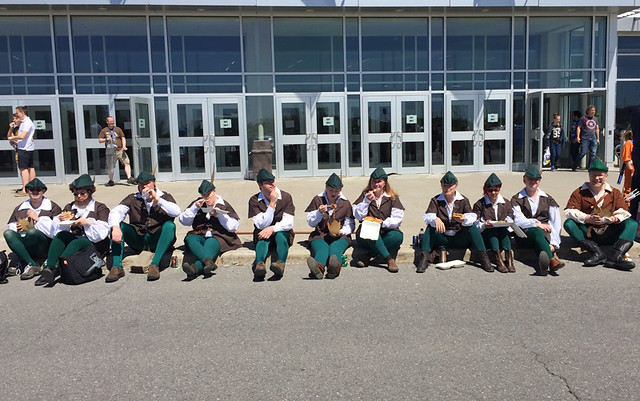 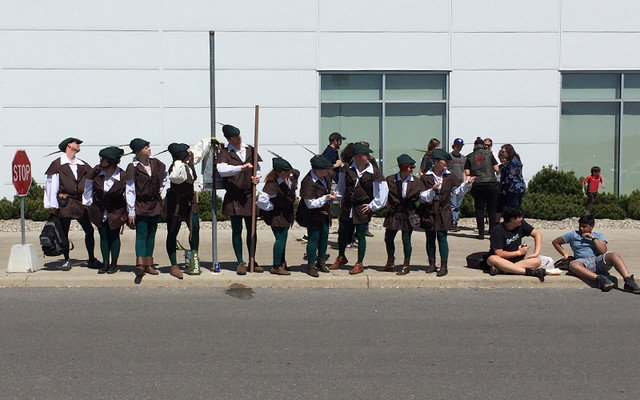 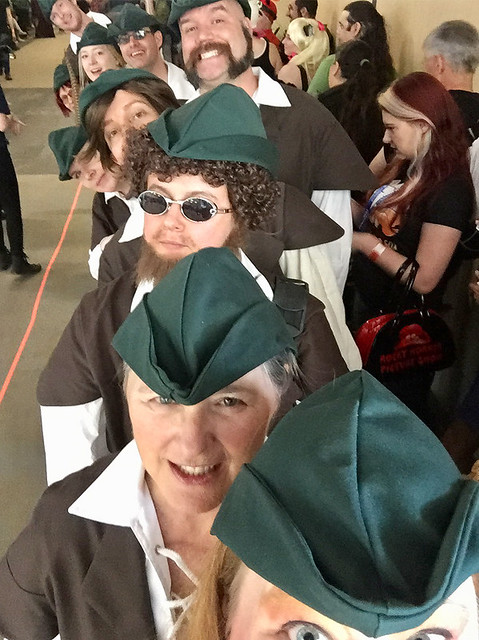 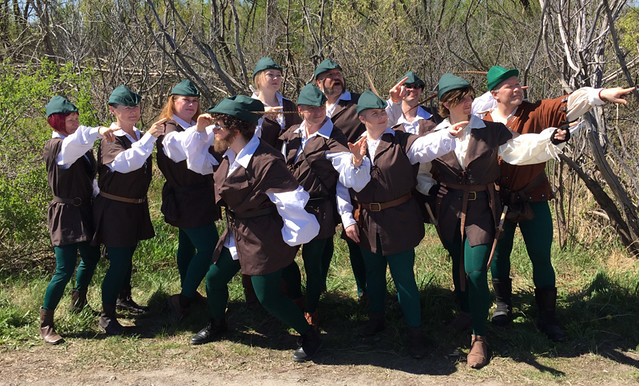 Back in my old blog I posted all kinds of patterns I had designed, and I’ve been trying to slowly re-post them on this blog so that they can go back into circulation. So here’s en embroidery pattern that I designed back in 2014: 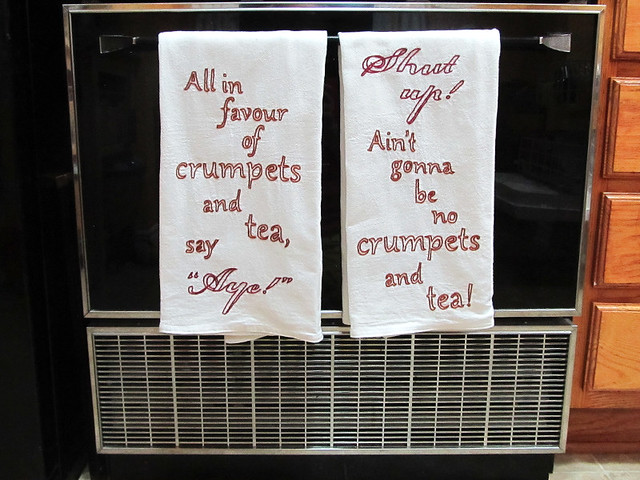 I would have taken new and better pictures, but I gave them away as gifts ages ago!

My younger brother is a huge fan of the 1995 movie Tank Girl. I mean, I loved that movie, but his fandom by far surpasses mine. I am all in favour of sarcastic embroidery, especially when it can be combined with practical objects. (This idea of pretty and practical is not new to me.) It’s not very often that I get a chance to embroider something for my brother –- he’s not generally a huge fan of embroidered items in general, and is often difficult to find gifts for. So for his birthday in 2014 I made him Tank Girl kitchen towels. The quotes are all from the interrogation scene.

These are commercially-made, 100% cotton tea towels (labeled as “premium flour sack tea towels” by Cantina), which I bought at $12.99 for a four-pack at Home Outfitters. They are 61cm X 91cm. I don’t think those specific ones in specific are available any more, but it’s possible to find something similar with a quick Internet search. Each towel that embroidered is actually two: one for the front, and another sewn onto the back to cover the wrong side of the embroidery. I chose the stitching colours of brown and brick red based on my brother’s preferences, trying to be fairly neutral so as to match his kitchen decor. 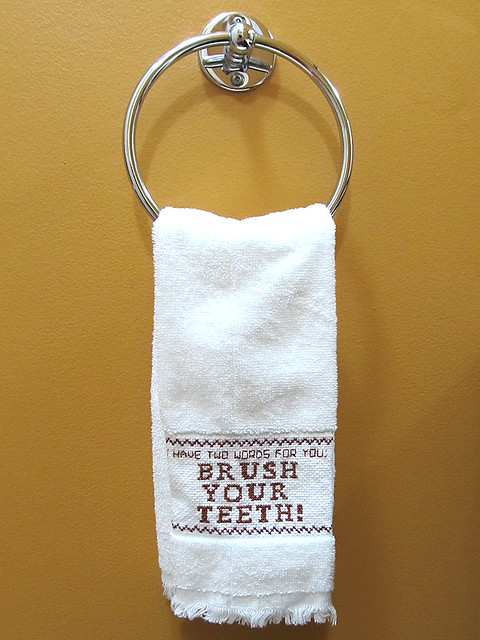 I also cross-stitched a coordinating fingertip towel for his bathroom, starting with a towel with an Aida fabric panel built in. They are available at most crafting supply stores (or online), and generally cost around $5.00.

So here are the patterns: 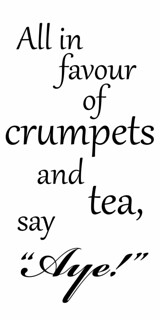 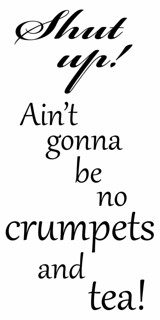 Click through for extremely large versions of these images which you can print to scale.

For the tea towels, I ran them through the washer and dryer a couple of times to shrink the fabric. I learned the hard way years ago to do this as it keeps the design from shrinking at a different speed than the stitching — which really sucks when you spent this much time working on something! It’s not as big of a deal with a mounted piece, but something like a towel is going to be washed over and over again. To transfer the pattern onto fabric, I printed them out to the proper scale to fit on my towels, then set the design underneath the fabric and used an embroidery transfer pen with the kind of ink that disappears when you wet it to trace the pattern onto the fabric. Then when I was done stitching, I just washed out the pen marks. 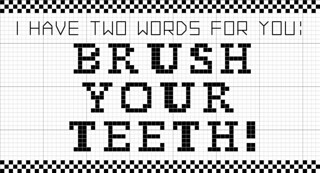 The cross-stitch pattern was transferred via the standard counting method instead of inking in the pattern first. I won’t go into the details of how to do counted cross-stitch here, but there are loads of resources online to teach you how, including a bunch of YouTube videos if you’re a visual learner like me. 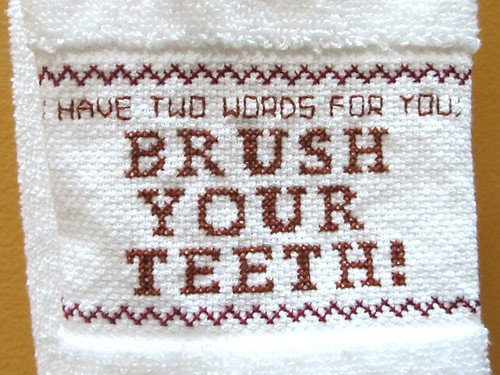 You’re welcome to use these patterns I designed for personal, educational, or small business use! And if you do, please send me a picture. I’d love to see your work.

Taffy Lane in Orleans (a suburb in the east end of Ottawa) is well known throughout the city for its possibly-excessive number of Christmas lights. Traffic moves slowly on this residential street almost every evening throughout December as people walk and drive to check out the decorations. They’ve been doing this for over thirty years! My children and I love this street and make a point of visiting at least once a season — preferably after the snow flies, because the light reflected off of the snow makes everything that much more sparkly.

This year I forgot to bring along my good camera, but I had to snap a few photos of these two front yards: 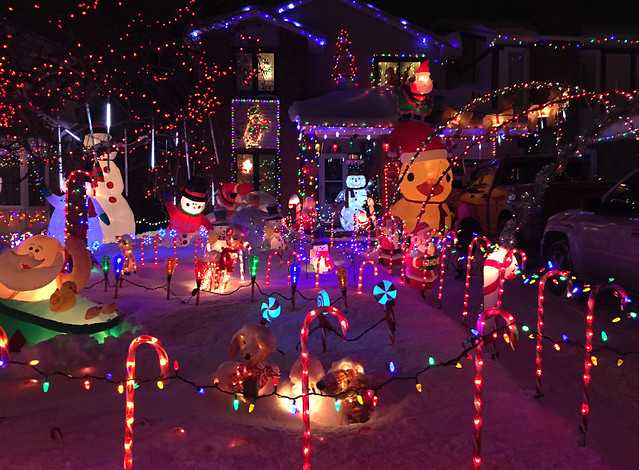 1092 Taffy Lane, which is my kids’ favourite, and not only because of Santa in the outhouse. 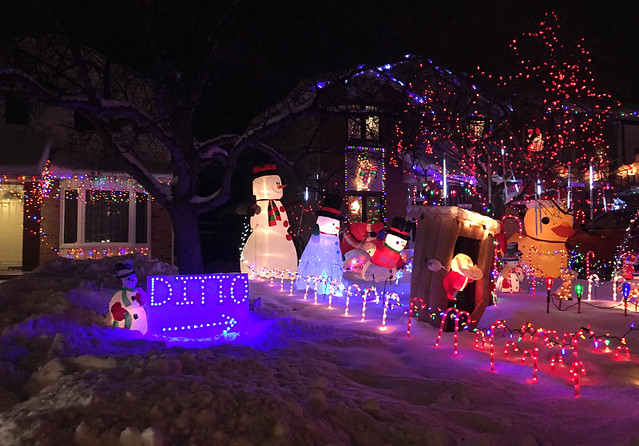 And then 1094 Taffy Lane. Gotta love that sense of humor.

I hope everyone had a happy and healthy holiday!