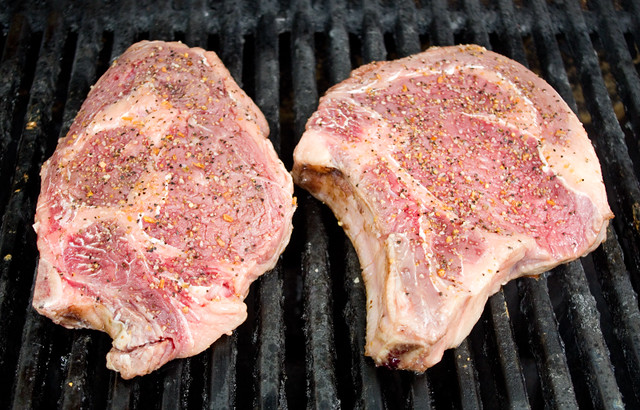 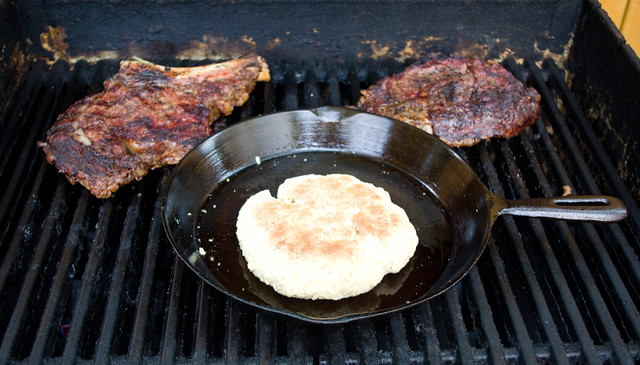 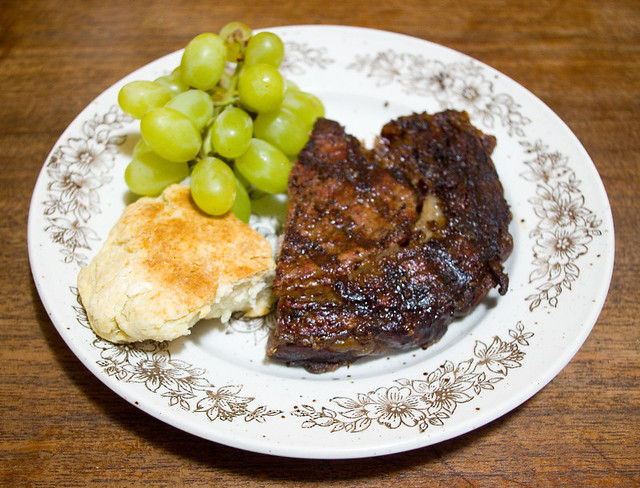 Not too long after I got the cast iron Nomar braiser, I found over the course of my thrifting a lovely little cast iron enameled pan. It’s only about 6.5″ (16.5cm) across, so I guess it’s individual-sized for frying. But a very popular baking trend at the moment is to bake and serve cakes and breads in cast iron pans, and this little pan would make a lovely serving for two for that kind of dish. 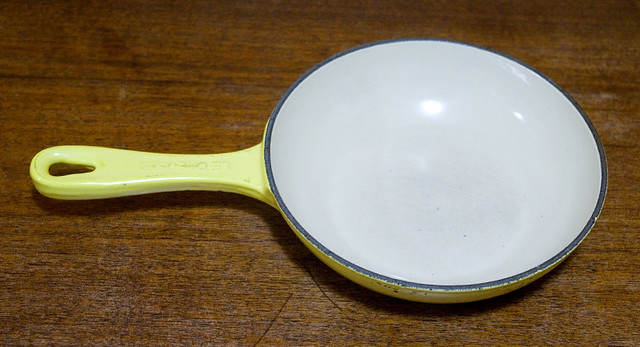 The inside doesn’t look half bad! There’s only a few scratches on the shiny enamel. And a bit of a squint at the handle reveals that it’s actually a Le Creuset, which means top-of-the-line workmanship. They don’t currently sell a pan this small, but one that’s about twice the size is $210.00, which does give an idea of how much it would have cost when new. 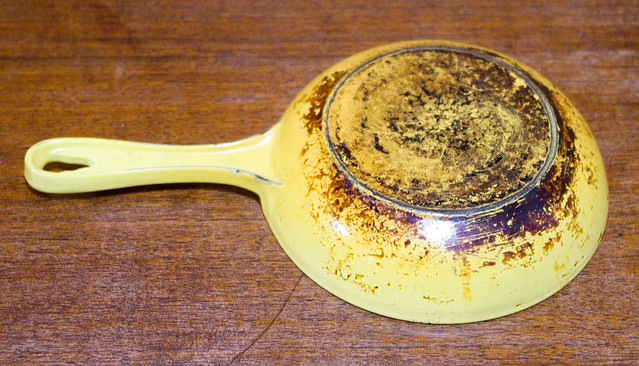 The bottom of the pan, however, needed some TLC. Luckily it’s not as bad as last time. 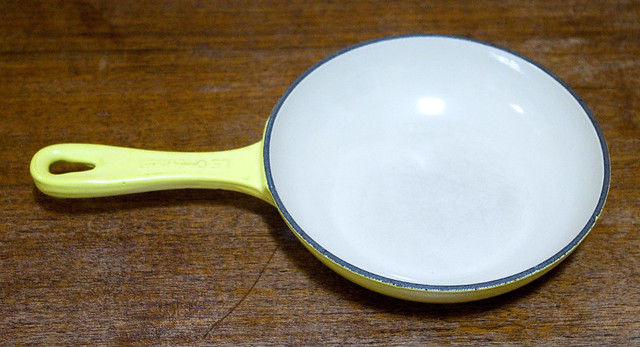 I used the baking-powder-and-lemon-juice paste technique again, and it worked a treat. It didn’t make too much of a difference to the inside… 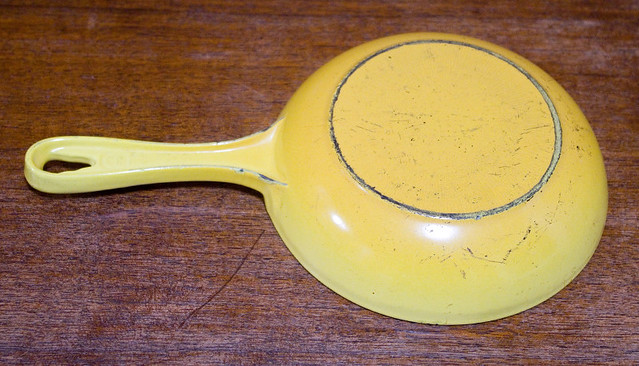 But now the outside looks lovely too! There are a few scratches that can’t be removed, but all of the gunk is gone. And this time, it only took one application of the paste and a good scrub, instead of a couple days of soaking and scrubbing. Works for me!

I picked up a box of old, used kitchenware a while back, and buried down deep at the bottom was what looked like an enameled cast iron casserole dish. It was in pretty rough shape. 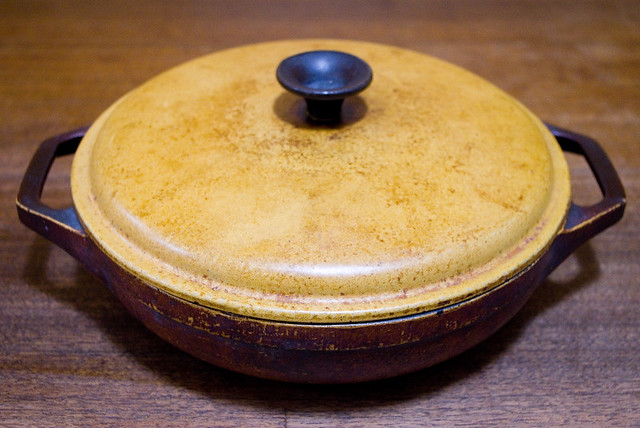 The inside wasn’t too badly off; there seemed to be some staining, but no chips or pits in the coating. The outside, however, was a mess:

My best guess is that the previous owner(s) had regularly cleaned the inside where food would actually touch, but were lackadaisical at best about cleaning the exterior. There was a brand name on the bottom, but it was so covered in gunk that I couldn’t quite make it out. But it seemed like a solid piece, so I decided to give cleaning it up a shot. 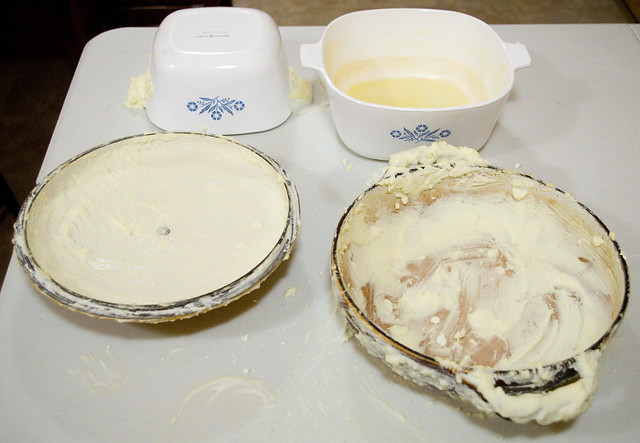 (I was also going to write about two vintage Pyrex dishes from the same box that had cleaned up really nicely with a lot of elbow grease, but yesterday I managed to bump into them and send them crashing to the floor. They hit each other on the way down and shattered into teeny tiny little pieces. They were only Cornflower Blue dishes, probably about 30 to 40 years old and not terribly rare, but after all that work I was — and still am — rather pissed off that I made such a stupid mistake. Anyway, that’s why there are Pyrex casseroles in that photo as well.)

One of the suggestions that I found online was to coat the piece in a paste of baking soda and lemon or lime juice, so I tried that first. If nothing else, it smelled nicer than any other cleaner I tried!

It actually made a pretty good dent in polishing up the interior.

However, it didn’t have the penetrating power to get a the worst of the exterior’s years of caked-on grease. I’m going to keep this technique in my arsenal for future reference, though, since it did do wonders for the areas where the damage wasn’t so bad, like on the outside of the lid.

The next tip I tried was to soak the pot overnight in a solution of two parts water to one part vinegar. This made so little difference that I didn’t even bother taking a picture. It was just a waste of time.

My friend suggested that I fill the sink with water and add two dishwasher pods, which did end up being the technique I was looking for. Even so, I had to soak for 12 hours, give it a scrub, change the water, and then return it to soak. This technique took three days, but just look how it turned out!

While it was soaking, I was finally able to get a good look at the logo. It’s a Nomar braiser, and my research dates it from the late 1960’s to early 1970’s: 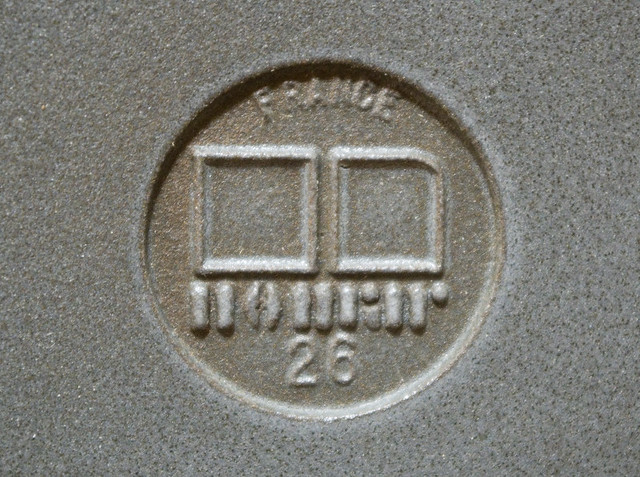 At some point Nomar was bought out by Staub, which is a competitor of Le Creuset. Apparently, back when they went by the Nomar name, the brand was an even stronger competitor. And Le Creuset is the be-all and end-all of cast iron ware these days! 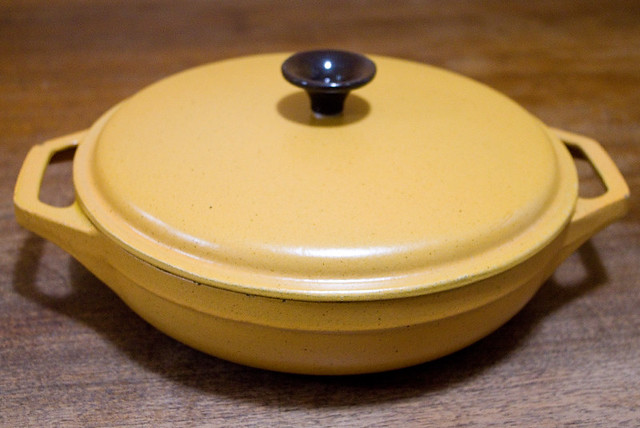 My roaster holds about 2.5L, which puts it between Le Creuset’s 1.5L and 3.5L braisers… Which retail for $200 and $340 CAD, respectively. So my piece old Nomar was definitely worth the work I put into it!

And I have to say, it’s awfully pretty.